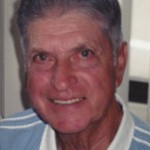 Born in the Hilldale section of Plains he was the son of the late Anthony & Carmella (Brozzi) Giuli.

Nat was employed for InterMetro of Wilkes-Barre until his retirement. He was a member of St. Andre Bessette Parish, Wilkes- Barre.

Nat played baseball for the Plains American Legion and was called up to the St. Louis Cardinals farm team. He was an avid fisherman and always caught the biggest ones.

Funeral will be held Thursday, March 27, 2014 at 9:00 am from the Corcoran Funeral Home Inc. 20 South Main Street Plains, with a Mass of Christian Burial at 9:30 am in St. Andre Bessette Parish, St. Stanislaus Kostka Church, Wilkes-Barre. Interment will be in the Parish Cemetery, Plains.

Friends may call Wednesday evening from 5 to 8 pm at the funeral home.