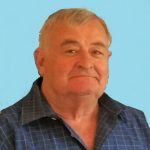 Born in Wilkes-Barre, he was the son of the late Martin and Regina (Hannon) Muldowney.

Marty was a graduate of James M. Coughlin High School, Wilkes-Barre, Class of 1962 and was a United States Coast Guard Veteran of the Vietnam War. He was proud of being one of the last Lighthouse Keepers, serving as an Engineman aboard Ship John Shoal Lighthouse Station on the Delaware Bay. He also served with two search and rescue units in Delaware and New Jersey. Upon his honorable discharge from the United States Coast Guard in 1967, Marty served a 5 year apprenticeship with Pipefitters Local 147, Wilkes-Barre, and later with Local 524 Scranton, following their merger. He was a proud pipefitter for over 40 years, until his retirement.

He was preceded in death by his wife of 42 years, the former Judith A. Rohme on February 20, 2010, and twin children Mary and Marty Muldowney.

Marty’s family will be forever grateful for the compassionate and loving care provided by the nurses and staff of the Cardiovascular ICU at the Wilkes-Barre General Hospital and Hospice of the Sacred Heart, Dunmore.

A Mass of Christian Burial will be celebrated by his son, Monsignor Thomas M. Muldowney, Vicar General of the Diocese of Scranton, on Monday, April 19, 2021 at 10:00 am at Saints Peter & Paul Church, 13 Hudson Road, Plains, PA 18705. Interment with Military Honors accorded by the United States Coast Guard and the Plains American Legion Funeral Honors Detail, will be held in St. Mary’s Cemetery, Hanover Township. Family and friends may call Sunday afternoon, April 18, 2021 from 2:00 to 5:00 pm at Saints Peter & Paul Church, Plains.

Those attending the visitation and/or funeral, we ask that you be brief when paying your respects, please follow the practice of social distancing, and masks are required at all times at the church. Arrangements entrusted to the Corcoran Funeral Home, Inc., 20 South Main Street, Plains, PA 18705.

Memorial donations may be made to Hospice of the Sacred Heart, 600 Baltimore Drive, # 7,
Wilkes-Barre, PA 18702, in Marty’s memory.