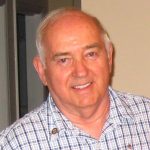 “Marty” as he was known to almost everyone was born on November 14, 1938, the son of the late Martin Corey Snyder and Catherine Burridge Jones and raised in Parsons, PA.

He was a retired HVAC engineer, a member of ASHRAE and RSES. He belonged to Saint John’s Lodge No. 233
F &A M, Jenkins Twp., and also belonged to several Masonic affiliations. He was a member of the Plains American Legion, Joseph E. Conlon, Post 558, The Rotary Club of Pittston and was on the W-B Salvation Army Advisory Board.

He loved photography and traveling, having set foot on every continent with the exception of the Antarctica. He was a longtime fan of auto racing, particularly NASCAR stock car racing.

Family and friends may call Wednesday evening from 6:00 to 8:00 pm at the funeral home. Masonic Services will be conducted Wednesday at 7:00 pm by Saint John’s Lodge No. 233, Jenkins Township

In lieu of flowers, memorial contributions may be made to the Rotary Foundation through any Rotary Club or member, The SPCA of Luzerne County, or the charity of one’s choice.