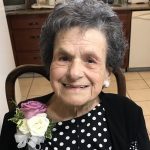 Louise Marie Yanoshak, beloved mother, “Nonni,” aunt and friend, died Dec. 22, 2022, at her home in Plains Township, surrounded by family. She was 95.

Born April 30, 1927, in the Plainsville, or “Flats,” section of the township, she was the daughter of the late Dominick and Josephine (Brozzi) Barbacci and grew up on Slope Street with her 12 siblings.

She graduated from Plains Memorial High School in 1945 and later earned her cosmetology license through Empire Beauty School. Shortly after opening a beauty shop in Plains, Louise fell in love with Harry Yanoshak, a beauty supply salesman. They married in 1951, eventually built their home on Powell Street and raised their sons in a tightly knit neighborhood filled with extended family. Louise and Harry celebrated 38 years together before his death in 1989.

Louise taught and supervised future beauticians at Empire Beauty School and later Bradford Beauty Academy in Wilkes-Barre. She also operated a beauty shop in her home for more than 40 years. While semi-retired, she worked with close friend Linda Makara at Shear Designs in Lee Park, Hanover Township. Throughout Louise’s career in cosmetology, she was beloved for not only her skills (she shampooed with vigor) but also for her compassionate and empathetic approach with her patrons, many of them longtime friends.

Louise’s faith was integral to her life. She was a parishioner of Saints Peter and Paul Parish in Plains as well as St. Thomas the Apostle Church in Bedford, Pa. A devout Catholic, she found strength and comfort in the Rosary and helped friends and family find the right prayer for the right purpose.

Her devotion to her family was inspirational. Besides her beauty business, her business was her beautiful family. She relished sharing memories, proudly celebrated the successes of others and encouraged people to love one another. She treasured any time spent with her numerous nieces and nephews. And late into her life, she continued to routinely visit relatives and friends whether the point was to simply have coffee and conversation or because they needed her care and attention. She thrived on personal connections and was generous of her heart and time. Often, she would ask: “What can I do for you?” or “How can I help?”

One of her greatest pleasures was visiting her sons and their families. She delighted in her time with her grandchildren. She maintained longtime friendships in Plains and formed networks of new friends during her extended time in Bedford.

Counted among America’s Greatest Generation, Louise and her siblings had their formative life experiences tempered by the Great Depression and World War II. Louise credited her mother as her role-model for exemplifying a life of extended generosity and compassion. Louise would not think twice about helping a stranger. She also showed care through her cooking. Willing to try new recipes or perfect an old standby, Louise took considerable pride in teaching her children, nieces, nephews and grandchildren how to re-create – even enhance – family favorites. She was always ready for company and kept a second freezer full of her homemade pasta, lasagna or cappelletti. At her table, there was always room for one more.

She enjoyed traveling and embraced a “drop everything and go!” attitude. She especially enjoyed her trips to Iceland (2011), Oregon (2017), the Jersey Shore and her many summers along North Carolina’s Outer Banks. When in Pennsylvania, she would often take local road trips on a moment’s notice. But a preferred destination was Boscov’s.

Louise enjoyed all celebrations, loved to dance and was often the last to leave the party. A highlight of her year included the annual Barbacci Reunion and the biennial Yanoshak-Kulmatiski Reunion. Aunt Louise was known for making homemade ice cream, a participatory event she said was more about making memories. She always reminded her family to stick together and help one another.

Louise’s family loves her so much. With a disarming smile, she was known for her kindness and her ability to find the good in people.

She was a beautiful soul and will be missed deeply.

The family would like to thank the doctors and staff at Geisinger Wyoming Valley Medical Center for their care of Louise.

A Mass of Christian Burial will be held Wednesday, December 28, 2022 at 10:00 am at Saints Peter & Paul Church, 13 Hudson Road, Plains, PA  18705, with Father John C. Lambert, Pastor, officiating.  Those attending the funeral mass, please go directly to church Wednesday morning.  A live stream of the funeral mass will be on Saints Peter & Paul Parish FACEBOOK page.  Private family Interment to follow at Transfiguration of Our Lord Ukrainian Catholic Church Cemetery, Nanticoke.  Family and friends are welcome to join the family for a viewing 3:00 p.m. to 6:00 p.m. Tuesday, December 27, 2022 at the Corcoran Funeral Home, Inc.,  20 S. Main Street, Plains, PA  18705