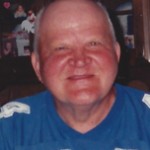 Born in the Hudson section of Plains, he was the son of the late George and Angela (Revera) Vos.  He attended Plains Twp., schools and was an Army Veteran of World War II serving in the Pacific Theatre attaining the rank of corporal.  Louie was employed as a coal miner for the Lehigh Valley Coal Company for many years and was employed for Craft Associates/Comfort Design as a furniture sander until his retirement.  He was a member of SS. Peter & Paul Church, Plains.

Uncle Louie as he was known to all was a beloved uncle and friend.  He dedicated his life to taking care of his family.  Those who were blessed to have him in their lives, remember many fond memories and have great stories to share about his exploits when left alone to his own devices.

He will be remembered for his hard work, his enjoyment of sitting on his swing in the back yard with a warm Stegmaier, his love of the Yankees, Judge Judy, and his ingenious uses for Duct Tape which became banned from the family home.  He taught us that everyday could be a good day.  His famous saying was “Better days are coming.”  But most of all, his genuine politeness and constant thank you for the slightest things and that never ending smile on his face.

Thank you Uncle Lou, your better day is here, just keep smiling. We all love you!

He was preceded in death by his brothers Walter, Peter, and Joseph Vos, sisters Helen Deveraux, Louise Bohac, and Josephine Sorokin.

Graveside services for Lou will be held at the convenience of the family in SS. Peter & Paul Cemetery, Plains.  Arrangements by the Corcoran Funeral Home, Inc., 20 South Main Street  Plains, PA  18705.