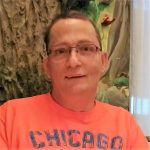 Louis F. Lee, 52 of Shickshinny, passed away Friday morning, February 17, 2017 at Penn Hospice at Rittenhouse, Philadelphia, PA, after a courageous battle against cancer.

Born in Wilkes-Barre, he was the son of the late Lewis F. and Beverly J. (Coulter) Lee.

Louie was a graduate of G.A.R. Memorial High School, Wilkes-Barre, and was a U.S. Navy Veteran, serving from 1981 – 1985. Upon his honorable discharge from active service, he was employed as a fork lift operator. Louis was an avid NASCAR fan and a supporter of #48 Jimmie Johnson, an avid Dallas Cowboy fan and loved working on cars in his spare time. Louie loved to golf and had a great sense of humor and was always ready with a joke to tell.

He and his wife the former Darlene Podmonski, celebrated their 8th wedding anniversary on February 13, 2017.

Funeral Services for Louis will be private and held at the convenience of the family from the Corcoran Funeral Home, Inc., 20 South Main Street, Plains, PA 18705.

Memorial donations may be made to the American Cancer Society, 712 South Keyser Avenue, Taylor, PA 18517 in Louie’s memory.