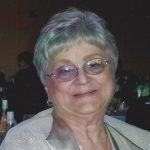 Lena L. Spagnuolo, 92 of the Hudson section of Plains Township, passed away peacefully, Wednesday, April 18, 2018 at her home.

Born in the Keystone section of Plains, she was the daughter of the late Dominick and Mary (Pascucci) Caporale. She was preceded in death by her husband of 65 years, Fred J. Spagnuolo on March 24, 2010, and her sister Dolores (Caporale) Keil.

Lena was a graduate of Plains Memorial High School, Class of 1943. She and her husband owned and operated Hudson Fairlawn Food Market until 1961, after which she was employed as a machine operator in the women’s garment industry until her retirement. After retirement, she was actively involved in working with her son Joseph and daughter-in-law Alyson at the Hudson Deli.

She was a member of Sacred Heart Church and its Altar and Rosary Society until its closure and merger with Saints Peter & Paul Church, Plains; the I.L.G.W.U.; the Plains Senior Citizens Club; and the Confraternity of Christian Mothers. She enjoyed working with the members of Saint Joseph’s Church to prepare Polish ethnic food for their bazaars. She passed these traditions onto her children and grandchildren.

Before her husband’s passing, Lena and Fred spent much of their time cooking together. For their children and grandchildren, it was always a special treat to watch them work together to create wonderful meals. Lena also spent a great deal of her time during the last years teaching and mentoring her grandchildren in cooking many of the Italian foods that were handed down to her from her mother and grandmother.

She especially enjoyed spending time with her children, grandchildren and great grandchildren. She always had special names for them.

The family would like to extend their gratitude and thank Rose Bohonko for being a loving caretaker of Lena.

A Mass of Christian Burial will be held Thursday, May 3, 2018 at 10:00 am in Saints Peter & Paul Church, 13 Hudson Road, Plains, with Father John C. Lambert, Pastor, officiating. Those attending the funeral mass are asked to go directly to church Thursday morning. Entombment will be held in St. Mary’s Cemetery, Hanover Twp. Family and friends may call Wednesday, May 2, 2018 from 5:00 to 8:00 pm at the funeral home. The Plains Lions Club will meet at 6:45 pm at the funeral home to pay their respects at 7:00 pm.

In lieu of flowers, memorial donations may be made to Saints Peter & Paul Food Pantry and Hospice of the Sacred Heat, 600 Baltimore Dr. #7, Wilkes-Barre, Pa 18702 in Lena’s name.