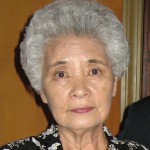 Born in Fukushima, Japan, she was the daughter of the late Masami and Kuniko (Sakamoto) Kikuchi, and the only sister of Masaaki, Masanori, and Takeshi Kikuchi of Japan.

A native of Japan, she met her husband Chester Makuch, a United States Navy Veteran and Merchant Marine in 1962 and were married in Japan in 1963. Shortly after their marriage, they moved to the United States and settled in the North End section of Wilkes-Barre for the next 53 years.

She was employed as a deli clerk at Sunshine Market and was a member of St. Andre Bessette Parish, North Wilkes-Barre. Judy enjoyed getting her Pennsylvania Lottery Tickets just about every day, was an avid Pittsburgh Steelers fan, and enjoyed watching the annual Army-Navy Football Game.

Funeral Services for Judy will be held Wednesday, October 5, 2016 at 12:00 pm at the Corcoran Funeral Home, Inc., 20 South Main Street, Plains, Pennsylvania 18705, with Father Kenneth Seegar, officiating. Private interment, along with her husband Chester, will be held in Washington Crossing National Cemetery, Newtown, PA, at the convenience of the family.

Family and friends may call Wednesday morning from 11:00 am till the time of service at the funeral home.

Memorial donations may be made to the American Cancer Society 101 W. Frack Street, Frackville, PA 17931.