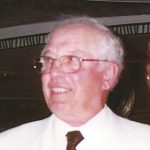 Joseph P. D’Alessandro, 88 of Wyoming, passed away Sunday evening, March 4, 2018 at his home after a brief illness.

Born in the Hilldale section of Plains Township, he was the son of the late Peter and Caroline (Akers) D’Alessandro.

Joseph was a graduate of Plains Memorial High School, Class of 1947, and was an Army Veteran of the Korean Conflict, attaining the rank of Corporal.

Joe worked for over 60 years as a painter contractor. His love of painting and working was only exceeded by the love of his family. That meant everything to him. He was a member of St. Barbara’s Parish, Exeter, The Elko’s Bowling League, Dupont and the Wyoming Hose Company #2. Joe was also a Little League coach for Wyoming Baseball.

He was preceded in death by his sisters Eleanor Keller and Marie Sabbatini, and his brother Frank D’Alessandro.

Joe’s family would like to thank Bayada Home Health for their compassionate care, particularly Mary Louise and Neil and Bayada Hospice.

A Mass of Christian Burial with Military Honors will be held 10:00 am Thursday, March 8, 2018 at St. Barbara’s Parish, St. Anthony of Padua Church, 224 Memorial Street, Exeter, PA 18643, with Father Michael E. Finn, Pastor, officiating. Private interment will be held in the Italian Independent Cemetery, West Wyoming. Family and friends may call Thursday morning from 9:00 am until the time of Mass at St. Barbara’s Parish.