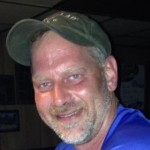 Born in Wilkes-Barre, Joe was the son of Joseph & Theresa (Yastremski) Krawetz , of Wilkes-Barre and was a graduate of James M. Coughlin High School, class of 1989. He was formerly employed for McCarthy Tire Company and Cleveland Brothers and currently as a bartender for the Triangle Club of Miners Mills.

Joseph was a member of St. Andre Bassett Parish, Wilkes-Barre and held memberships and was vice-president of the Triangle Club, Miners Mills, the Plains American Legion, the Polish American Veterans, and the Polish Club Plains. He was an avid New York Jets fan, and enjoyed golfing.

Joe’s daughter Madison Grace (his banana) meant the world to him. He was the Golden Boy to his Mother and enjoyed having a beer and relaxing with his Father.

Funeral will be held Friday, November 6, 2015 at 9:30 am from the Corcoran Funeral Home, Inc., 20 South Main Street Plains, with a Mass of Christian Burial at 10:00 am in St. Andre Bessette Parish, 672 North Main Street, Wilkes Barre, with Father Kenneth M. Seegar, pastor, officiating. Interment will be held in Mount Olivet Cemetery, Carverton section of Wyoming.

Family and friends may call Thursday evening from 5 to 8 pm at the funeral home.