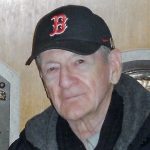 Born in Wilkes-Barre, he was the son of the late John and Sophie (Jachimiach) Kulesza.

Joseph was a graduate of G.A.R. Memorial High School, Wilkes-Barre, and was a U.S. Army Veteran of the Korean War. Upon his honorable discharge from active duty in 1953, he was employed as a laborer for the Wilkes-Barre City Department of Public Works until his retirement.

Joseph was an avid baseball fan and his favorite team was the Boston Red Sox. He made many trips to Fenway Park in Boston to watch games. He would also go to watch the Wilkes-Barre/Scranton Railriders and the Pawtucket Red Sox play in Moosic.

Funeral Services for Joseph will be held Wednesday, March 30, 2022, at 10:00 am at the Corcoran Funeral Home, Inc., 20 South Main Street, Plains, PA 18705. Interment with Military Honors accorded by the United States Army will be held in Chapel Lawn Memorial Park, Dallas. Family and friends may call Wednesday morning from 9:00 am until the time of service at the funeral home.

Memorial donations may be made to the charity of one’s choice in Joseph’s memory.