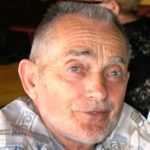 Joe was born and was a lifelong resident of his beloved Hilldale, son of the late Celeste and Nancy (Bonanni) Lini, and was known for cooking his Italian specialties. He graduated from Plains Memorial High School in 1950, then served in the U. S. Air Force during the Korean War attaining the rank of Airman 1st Class. Upon his honorable discharge from military service, he worked as a chef at Nonni Lini’s Restaurant in Hilldale, as a Plains Police Dispatcher, and later was one of the first Luzerne County 911 dispatchers. He served as a member and Past Commander of the Italian American Veterans, Post 1 and was an original member of the Hilldale ITLO Club. Joe was a member of St. John the Evangelist Church community and was very active in veteran’s affairs and local politics. He adored his grandchildren and loved fishing and cooking.

The family would like to thank Riverview Nursing Home and Rehabilitation Center (Timber Ridge) Staff and Compassionate Care Hospice for their care of Joe over the past few years.

A Mass of Christian Burial will be held Friday, September 3, 2021 at 9:30 am at St. John the Evangelist Church, 35 William Street, Pittston, PA  18640, with Father Joseph P. Elston, Pastor, officiating. The family requests that all visitors and those attending Mass please wear face masks.  Interment with Military Honors accorded by the United States Air Force and the Plains American Legion, Joseph E. Conlon, Post 558 Funeral Honors Detail will be held in the Italian Independent Cemetery, West Wyoming, PA  18643.  Family and friends may call Friday morning from 8:30 am until the time of Mass at St. John’s Church.  Arrangements entrusted to the Corcoran Funeral Home, Inc., 20 South Main Street, Plains, PA  18705.

If you choose to honor Joe, donations can be made to https://www.inclusionproject.org/ or Plains Ambulance Association.