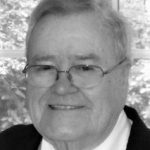 John “Whitey” Gillespie, 92 of Dallas, and formerly of the East End Section of Wilkes-Barre, passed away Sunday evening, March 1, 2020 at the Mercy Center, Dallas, where he had been a resident.

Born in the East End Section of Wilkes-Barre, he was the son of the late John and Isabelle (Kelly) Gillespie.

Whitey was an Army Veteran of World War II and was employed as a custodian for the Wilkes-Barre Area School District at Mackin Elementary until his retirement. A man of great faith, Whitey was a member of Holy Saviour Church, East End, and currently a member of Gate of Heaven Church, Dallas, where he was a Senior Altar Server and Eucharistic Minister.

Whitey was very proud of his Irish heritage and was a member of the Donegal Society of Greater Wilkes-Barre, where he was honored as Man of the Year, and was selected in 1997 as the Grand Marshall of the City of Wilkes-Barre Annual St. Patrick’s Day Parade. A man with a big heart who loved giving back, Whitey began playing Santa Claus in 1947, bringing smiles and joy to generations of families, friends, and loved ones for over 65 years. Whitey was also a wonderful baker and would often pass out his famous scones.

He was preceded in death by his first wife the Joan (Wallace) Gillespie on August 4, 1995 and his brother James Gillespie.

A Mass of Christian Burial will be held Thursday, March 5, 2020 at 10:30 am at Gate of Heaven Church, 40 Machell Drive, Dallas, PA 18612. Private interment will be held in St. Mary’s Cemetery, Hanover Twp., PA. Family and friends may call Thursday morning from 9:30 am until the time of mass at Gate of Heaven Church. Arrangements entrusted to the Corcoran Funeral Home, Inc., 20 South Main Street, Plains, PA 18705.

In Lieu of flowers, Memorial Donations may be made to the Mercy Center, 301 Lake Street, Dallas, PA 18612 in Whitey’s memory.