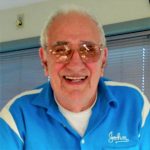 Born in Plains, he was the son of the late Michael and Clara (Siani) Florio.

John was a graduate of Plains Memorial High School, Class of 1946 and was an Army Veteran of the Korean Conflict.

John was employed as a machinist and was co-owner of the Florio Family run businesses, Plains Paper Company and Florio’s Pizza.

He was a member of Saints Peter & Paul Church, Plains, and the Plains American Legion, Joseph E. Conlon, Post 558.

He was preceded in death by his daughter Katherine Vorona, sisters Clara, Minnie, Mary, and Rose Florio, and Margaret Ciali, brothers James, Anthony, and Joseph Florio.

Funeral services will be private and held at the convenience of the family from the Corcoran Funeral Home, Inc., 20 South Main Street, Plains, PA 18705.

Memorial donations may be made to the Katherine Florio Vorona Scholarship Program by visiting www.vasleepmedicine.org/awards.html.