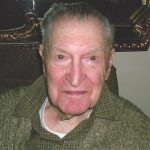 Born in Plains, he was the son of the late Vincent and Domicella (Baranouski) Blazis.

John attended Plains Memorial High School, and was an Army Air Corps Veteran of World War II attaining the rank of Staff Sergeant. In 1936, John played in a baseball game against the great Babe Ruth in Jackson, Mississippi. After his honorable discharge from the Army, he was employed as a mechanic for American Tobacco Company, Mountain Top, until his retirement.

John was a member of Saints Peter & Paul Church, Plains, and The Plains American Legion, Joseph E. Conlon, Post 558, where he held membership for 72 years. He was an avid sports fanatic about the New York Yankees and the Philadelphia Eagles.

In addition to his parents, he was preceded in death by his brothers William, Anthony, Peter, and Albert Blazis, and his sister Mary Flynn.

Due to the current global pandemic, funeral services will be private and held at the convenience of the family from the Corcoran Funeral Home, Inc., 20 South Main Street, Plains, PA 18705.