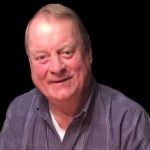 Born in Plains, Jack was the son of the late Louis and Mary (Johnson) Giomboni.

He was a graduate of Plains Memorial High School class of 1964 and served in the U.S. Army Reserves. A well-known business owner in Plains Township, he was the owner of Giomboni’s Service Station and The Willow Tree Restaurant and Bar, both of Plains and was also employed for Metropolitan Life Insurance Company.

Jack was a member of Plains United Methodist Church, Plains, the Masonic Landmark Lodge, #442 and the ITLO Club of Plains.

Jack loved his wife, sons, and his family, especially his grandchildren who were the Light of his Life!

In addition to his parents he was preceded in death by his Son Jarrod Giomboni on August 2, 2006, Brother Louis Giomboni and Brother-in-law John Gonda, Jr.

Due to the current global pandemic, Funeral Services will be private and held at the convenience of the family from the Corcoran Funeral Home, Inc., 20 South Main Street Plains, Pennsylvania 18705.