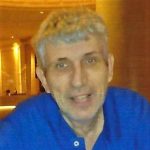 John A. Lanczak, Jr., or Chris, as everyone knows him as that name, age 65, passed away on July 14, 2022, at Wilkes Barre General Hospital, with his Sister and Brother-In-Law at his side.

Chris was a long-life resident of Luzerne. He attended and graduated from Sacred Heart Grammar School and received all his Sacraments from Sacred Heart Church until its closing and became a member of Holy Family Church due to a merge. Chris later attended Bishop O’Reilly High School and went on later in life to receive his GED.

In his teens Chris enjoyed basketball and could throw a basketball from mid court over and over and never miss the hoop. He went on to be in a local team and became part of a Championship team. Although he enjoyed basketball, he really enjoyed baseball, especially the New York Yankees. As a young child, his parents would take the entire family to New York and he, his father and old brother would see a Yankee game. That was always the thrill of Chris’s life.

Just about everyone who lives in Luzerne knows Chris, especially by his blue eyes, his smile, but most of all, his royal blue shirt, he wore one every day. Chris was always caring and kind, he would strike up a conversation with anyone, and by the time the conversation was over he had a new friend. Once we were on a long bus ride and by the time it was over, Chris had made 10 new friends. If you were lucky enough to meet him, you would never forget him.

Chris was also very religious, he was a member of the Men of The Sacred Heart. He especially enjoyed in participating in saying parts of the rosary and staying for mass until the organization moved to Hazleton. He was also a former member of the Knights of Columbus, Luzerne.

Surviving are his Sister Karen Leonardi and Brother-In-Law Bob, with whom he resided, Brother Michael Lanczak and Sister-In-Law Roberta, Nephews, Michael and Robbie and a bevy of friends he made along the way, but especially the lifelong relationships he had with so many, too numerous to count. Chris will sadly be missed by all.

A Mass of Christian Burial will be held Wednesday, July 20, 2022 at 10:15 am at Holy Family Parish, 574 Bennett Street, Luzerne, PA 18709. Interment will be held in Mount Olivet Cemetery, Carverton section of Wyoming. Family and friends may call Wednesday morning from 9:15 am until the time of mass at church. Arrangements entrusted to the Corcoran Funeral Home, Inc., 20 South Main Street, Plains, PA 18705.