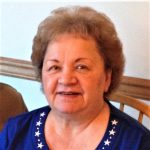 Joan Labashousky, 78 of Wilkes-Barre and formerly of Laflin, passed away Wednesday evening, December 16, 2020 at the Wilkes-Barre General Hospital.

Born in the Hilldale section of Plains, she was the daughter of the late Frank and Rose (Yonski) Yanko.

Joan was a graduate of Plains Memorial High School, Class of 1960, and was employed at Dorrance Manor, Kingston, in the laundry for 16 years, until her retirement.

Joan’s family owned and operated the Laflin Grove from the 1950’s to early 1990’s. She was known as (little) Joanie to most of her family and friends. Many will remember having gone to the Grove with their families to attend clam bakes, local business organizations’ dinners, weddings, graduation parties and so much more. She and her husband Ray built a house in Laflin, raising their family at the Grove and lived there until Ray’s passing. She always talked about the old days at the Grove, dancing and listening to Polka bands playing in the dining room of the bar.
Joan and Ray enjoyed going on trips to Atlantic City, and eating out at restaurants. Joan loved babysitting her grandchildren, her first Matthew, Katrina, and her baby doll. She could strike up a conversation with just about anybody and have long conversations with people in the grocery store. She was an avid fan of Elvis and the Dallas Cowboys. She will be missed by all of those who were blessed to have her in their lives.

She was preceded in death by her husband of 42 years, Raymond S. Labashousky on October 22, 2004, and her brothers Frank Yanko, Jr. and John “Jack” Yanko, Sr.

Surviving are her daughters Sharon Jobson and her companion Norman Washick, Pittston Township, and Judy Phillips and her husband Bruce, Plains, grandchildren Matthew Phillips, and Katie and Emily Jobson, nieces and nephews.

Joan’s family would like to thank the doctors, nurses and staff of the Wilkes-Barre General Hospital for the wonderful care and compassion show to Joan during her final days.