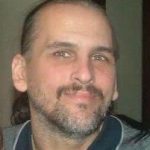 Born in Plains, he was the son of the late George and Barbara (Yablonski) Warnagiris, Sr.

Jeff was known for his long, entertaining stories, which he loved to repeat. He particularly loved to reminisce of his childhood days growing up in the Irishtown section of Plains Twp. He was well versed on many pop-culture movie classics. Jeff could quote many verbatim and would often attempt to stump his brother through spontaneous pop quizzes whenever they got together. He was always the most fun person to be around.

Jeff was preceded in death by his infant daughter Christina Warnagiris.

Surviving are his children, Jeffrey, Kiera, and Aarron Warnagiris, all of Wilkes-Barre; grandson Donald; brother George Warnagiris and his wife Candice, Plains; his nieces; and several aunts and uncles.