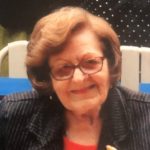 Born in Wilkes-Barre, she was the daughter of the late John and Anna (Flosser) Bowden.

She was preceded in death by her husband Gerard A. Fey, Sr. on March 25, 1996, and her brother John Bowden.

Funeral will be held Tuesday, December 31, 2019 at 10:30 am at the Corcoran Funeral Home, Inc., 20 South Main Street, Plains, Pennsylvania 18705, with a Mass of Christian Burial at 11:00 am at St. Maria Goretti Church, 42 Redwood Drive, Laflin, PA 18702, with Father James J. Walsh, Pastor, officiating. The Parish Rosary Group will pray the Divine Mercy Chaplet and Rosary in the Church 30 minutes before the Mass. All are invited to attend. Interment will be held in St. Mary’s Cemetery, Hanover Twp. Family and friends may call Monday evening from 5:00 to 7:00 pm at the funeral home.