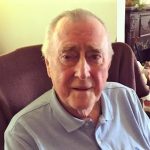 James J. Conway of Plains, PA passed away at Wilkes-Barre General Hospital due to COVID-19 on November 10, 2020.

Born in Plains, PA on July 15, 1936, he was the son of the late James K. and Alice (Corcoran) Conway. Raised in Wilkes-Barre, he was a graduate of Wilkes-Barre Twp. High School, class of 1955. Jim was a veteran of the US Army and furthered his career with the Central Intelligence Agency. He returned to Wilkes-Barre in 1968 and joined Owens-Illinois, later called Techniglass, in Pittston, for almost 30 years where he held various roles in the union including President and Steward at large until his retirement.

Jim was a member of Saints Peter and Paul’s Church in Plains, where he served as an usher and was dedicated to his daily rosary. He was also a member of the Plains American Legion, Joseph E. Conlon Post 558, where he served on both the board of directors and the Honor Guard.

Upon his retirement, he worked in the family business, Jerry’s Café in Ashley where he and his wife made their traditional ham and cabbage dinner every St. Patrick’s Day. An avid sports fan, he loved to golf with his friends and family, and was a devoted fan to the Boston Red Sox and Chicago Bears. He wore his Red Sox and Bears swag with pride.

In addition to his parents, he was preceded in death by his sister Mary Eileen Williams and her husband Donald, brother William Conway, sister Alice Morrow, and brothers Thomas and Joseph Conway, sister-in-law Jeanne Herron Conway, and nephews Patrick Conway, Jr., John Remy, and Christopher Cavanaugh.

The Conway family would like to thank the staff in both the Critical Care Unit and the COVID-19 unit at Wilkes-Barre General Hospital, especially Dr. Melissa Taylor, and all the nurses, physicians, and physician assistants who went out of their way to keep his family connected via video chats during this difficult time of separation and grief.

In lieu of flowers, memorial donations made be made to Saints Peter & Paul’s Food Pantry, 13 Hudson Road, Plains, PA 18705

A Celebration of Life, including a funeral mass will be held to honor Jimmy at a later date at the convenience of his family. Arrangements entrusted to the Corcoran Funeral Home, Inc., 20 South Main Street, Plains, PA 18705.