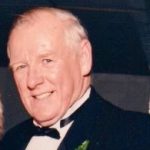 Born in Wilkes-Barre, he was the son of the late Hugh J. and Bridget (Brown) Boyle. Hugh was a graduate of James M. Coughlin High School, Wilkes-Barre, and was a U.S. Navy Veteran of World War II, and the Korean War, attaining the rank of Seaman First Class.  After his honorable discharge from active duty, he was employed as a Lather in the construction industry and later as a school custodian at Wilkes-Barre Township High School, and last at Plains Junior High School.

Hugh was co-founder of the Donegal Society of Greater Wilkes-Barre, was a member of Holy Saviour Church, East End, and its Holy Name Society.  Hugh also played professional football for the Wilkes-Barre Bullets and played volleyball, playing an exhibition game against Wilt Chamberlain.

In addition to his parents, he was preceded in death by his daughters Karen Cook and Theresa Jones, and his brother James Boyle.

Hugh’s family would like to thank the doctors, nurses, aides, therapists, and staff at Wesley Village, the VA Medical Center, and Allied Services, Meade Street, for the wonderful care given to their father.

A Mass of Christian Burial will be held Tuesday, November 9, 2021 at 10:00 am at Saints Peter and Paul Church, 13 Hudson Road, Plains, PA  18705, with Father Joseph A. Kearney, officiating.  A Live Stream of the Funeral Mass will be on Saints Peter & Paul Parish FACEBOOK page. Inurnment with Military Honors accorded by the United States Navy and the Plains American Legion Funeral Honors Detail will be held in St. Mary’s Cemetery, Hanover Township, PA.  Family and friends may call Tueaday morning at church from 9:30 am until the time of Mass. Arrangements entrusted to the Corcoran Funeral Home, Inc., 20 South Main Street, Plains, PA  18705.