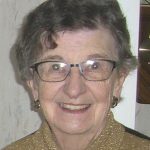 She was born September 27, 1927, the eighth of eleven children born to Ukrainian immigrants John and Paraska (Popadiuk) Melnyk of Plains. After graduating from Plains Memorial High School, she moved to Warren, Michigan where she enjoyed a long career in the administration of Square D Products, later Schneider Electric. After retirement, she moved back to Plains to take care of her mother, who died in 1992 at age 100.

Helen, with her sister Irene, hosted many holiday dinners for her extended family and was known for her welcoming personality and never-failing generosity. She was always ready for a trip whether as close as New York City or as far as China and Hawaii.

She is survived by a brother George Melnyk of Endicott, New York; and sisters Alice Zaley of Wilkes-Barre; and Irene Melnyk of Plains along with 17 nieces and nephews.

According to Helen’s wishes, funeral services will be private at the convenience of the family. Arrangements entrusted to the Corcoran Funeral Home, Inc., 20 South Main Street, Plains, Pennsylvania 18705.