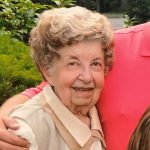 Born in Wilkes-Barre, she was the daughter of the late Henry H. and Helen A. (Szyszkowski) Henczel.

Helen was a graduate of Plains Memorial High School, Class of 1938, and was Valedictorian of the Commercial Courses. She was an Army Veteran of World War II, serving with the Woman’s Army Corps (WAC). Helen attained the rank of 1st Lieutenant, serving in the Post Exchange units in the San Francisco area at Fort Winfield Scott.

After her honorable discharge from active service, she attended Wilkes College and was employed at American Auto of Wilkes-Barre, and later at the PA Department of Environmental Resources as the business manager. After her retirement, she was an assistant librarian at the Pittston Public Library.

She was a member of St. Maria Goretti Church, Laflin, where she was a member of the parish rosary group and was rosary leader, the Plains American Legion, Joseph E. Conlon, Post 558, the Dupont AMVETS Post 189, the Secular Franciscan Order, the Oakwood Park Townhouse Association, where she served as treasurer, and the National Office Managers Association. Helen also volunteered her time to various organizations including the American Red Cross, at Wilkes and Misericordia Universities, the Veterans Administration Medical Center, was a CCD teacher and coordinator.

She was preceded in death by her husband Benjamin Z. Block on April 29, 2010, brother Henry Henczel, and sisters Matilda Raven, and Dolores Hydock.