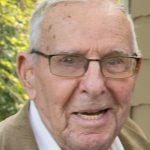 Harry D. Harper, 97, of Jenkins Township, PA, and formerly of St. Croix, USVI, and Freehold Township, NJ, passed away Wednesday, February 14, 2018 at United Methodist Homes, Wesley Village Campus, Jenkins Township, PA.  Born on August 30, 1920, in Brooklyn, NY, he was the son of the late Edward and Lois (Henderson) Harper.  He was preceded in death by his brother, Edward Harper, Jr.

Harry attended Newtown High School in Elmhurst, NY where he began his studies in agriculture.  After graduation he attended and earned an Associate’s Degree at the State Institute of Applied Agriculture in Farmingdale, NY.  Following college Harry and his parents purchased a farm in Freehold Township, NJ, which became Harper’s Poultry Farm.  A few years later, he was called to serve his country for World War II in the US Army and was part of the Allied Occupation of Japan at the end of the war.  Harry’s varied interests and pursuits not only led him to begin his own poultry business, but also a second career in title insurance, and, in the late 70’s, started Pine Cone Campground on a portion of the farm property.   Harry also became interested in local government and served as a Freehold Township Committeeman from 1970 to 1976 and was the Mayor of Freehold Township in 1972.

Harry was a devout Christian.  He was an active member in each of the many churches he belonged to over the years and was a long-standing member of The Gideons International.  His many activities included prison ministry, Bible distribution, various roles in church leadership, and generously giving to many different Christian organizations.  Locally, he was a member of Living Hope Bible Church, Plains, PA.

Memorial services for Harry will be held at 10:30 AM on April 7, 2018, at Living Hope Bible Church, 35 South Main Street, Plains, PA 18705 with Pastor Mark DeSilva officiating.  Family and friends may call from 9:30 AM until time of service at the church.  In lieu of flowers, donations can be made to The Gideons International in memory of Harry.  Arrangements are entrusted to the Corcoran Funeral Home, Inc., 20 South Main Street, Plains, PA  18705.