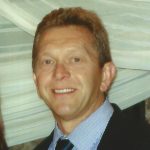 Gary T. Phillips, 59 of Plains Township, passed away Thursday morning, October 10, 2019 at the Jewish Home of Eastern PA, Scranton, after a 9 year battle against Alzheimer’s disease.

Born in Wilkes-Barre, he was the son of Janet (Malenovitch) Phillips of Plains and the late Thomas J. Phillips.

Gary was a graduate of James M. Coughlin High School, Wilkes-Barre, and attended East Stroudsburg University. Gary was employed as a postal worker for the United States Post Office until his retirement. He was a member of St. Maria Goretti Church, Laflin, the Polish American Veteran’s, Plains, and coached Swoyersville Girls Softball.

Gary was a devoted husband, father, son, brother, uncle, cousin, and friend. He was an avid New York Giants and St. Louis Cardinals fan. He and his wife Bonnie loved to travel even after Gary’s diagnosis with this terrible disease.

In addition to his father Thomas, he was preceded in death by his brother Tommy Curt Phillips.

Surviving in addition to his mother Janet are his wife of 39 years, the former Bonnie A. Moses, Plains, daughter Jenny Phillips and her spouse Jennifer Thomas, Blakely, brothers Kevin Phillips, Plains, Joseph Phillips and his wife Mary Lou, Dallas, and Jeffrey Phillips and his companion Sally Potorski, Jenkins Township, sisters Darlene Phillips Dietz and her husband David, and Cindy Niceforo, all of Plains, nieces and nephews Patience, Ryan, Shauna, Chad, and Todd Phillips, and Braden Leh, aunts, uncles, and cousins.

Gary’s family would like to thank the nurses’, aides’ and staff of the second floor of the Jewish Home of Northern PA for their compassion and wonderful care given to Gary and his family.

A Mass of Christian Burial will be held Monday, October 14, 2019 at 10:30 am at St. Maria Goretti Church, 42 Redwood Drive, Laflin, PA 18702. Those attending the funeral mass are asked to go directly to church Monday morning. The Parish Rosary Group will pray the Divine Mercy Chaplet and Rosary in the Church 30 minutes before the Mass. All are invited to attend. Interment will be held in Saints Peter & Paul Cemetery, Plains. Family and friends may call Sunday afternoon from 1:00 to 4:00 pm at the Corcoran Funeral Home, Inc., 20 South Main Street, Plains, PA 18705.

Memorial donations may be made to The Alzheimer’s Association of Greater Pennsylvania Chapter, 57 North Franklin Street, Wilkes-Barre, PA 18701, or to St. Maria’s Goretti Church, in Gary’s memory.