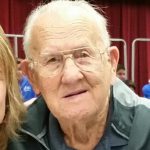 Born in Plains, he was the son of the late Antoni and Sophie (Mesiewicz) Kondracki.

He was a graduate of Marymount High School and was an Army Veteran of The Korean War, attaining the rank of Sergeant. He was a mechanic and owned his own shop, Frank & Al’s Transmissions on Main Stret in Plains, before retiring. He was a long-time member of the Polish American Veterans, Hudson section of Plains, where he served as treasurer for many years. His hobbies included bowling and working in his garden. Frank moved to Texas in 2015 to be closer to his son, Michael, and his grandchildren.

He was preceded in death by his wife of 46 years, the former Helen L. Lebert, on May 28, 2011; by brothers Thomas, Peter, Anthony, Alphonse and Aloysius; and by sisters Clem, Clara and Agnes Thurber.

He is survived by his son, Michael, and daughter-in-law, Maureen, of Grapevine, Texas; grandsons Brandon and Nathan Kondracki, both of Grapevine; and granddaughter Leah Kondracki of Carrollton, Texas.

He is also survived by an older brother, Sylvester Kondracki of Wilkes-Barre.

Memorial donations if desired may be made to the Korean War Veterans Memorial Foundation, 950 North Washington Street, Suite 311, Alexandria VA, 22314.