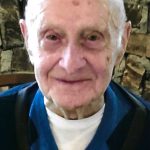 Frank D. Spagnuolo, affectionately named “Poppy” by his grandchildren, passed away peacefully July 10, 2022 at Allied Services Hospice Meade Street, Wilkes-Barre. Reaching the age of 101, Frank often remarked “I think they forgot me!” He will now be happily reunited with the love of his life Edith Sozzi Spagnuolo.

Born in the Hudson section of Plains Township, he was the son of the late John and Antoinette (Merlino) Spagnuolo.

Frank’s journey in life was one of a hardworking, loving husband, father, grandfather and great-grandfather.

He was preceded in death by his wife the former Edith Sozzi on March 14, 1973, brothers Armand, Fred, John, Carl, and infant brother Frank, and his sister Edith Pascucci.

A special thank you to Chris, his nurse, friend and caretaker for her kindness and help, Geisinger 6th floor nursing staff and Allied Services Hospice, Wilkes-Barre, the nurses and staff for their wonderful care and compassion given to Frank.

A Mass of Christian Burial will be held Wednesday, July 13, 2022 at 10:00 am at Saints Peter & Paul Church, 13 Hudson Road, Plains, PA 18705, with Father John C. Lambert, Pastor, officiating. A Live Stream of the Funeral Mass will be on Saints Peter & Paul Parish FACEBOOK page. Interment will be held in Sacred Heart Cemetery, Plains, Twp. Family and friends may call Wednesday morning from 9:00 am until 10:00 am at church. Arrangements entrusted to the Corcoran Funeral Home, Inc., 20 South Main Street, Plains, PA 18705.