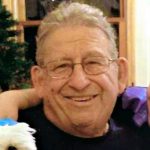 Francis “Maxie” Baldrica, 78 of Kingston, passed away Sunday evening, August 8, 2021 at the Wilkes-Barre General Hospital with his family by his side.

He was born in the family homestead in Plains Township, PA, son of the late Ernesto and Elena “Helen” (Rosati) Baldrica.

Maxie was a graduate of Plains Memorial High School, Class of 1961, where he excelled in football and baseball.  Maxie was always told he was a fantastic catcher, but ran like he had a piano on his back.  He was an Air Force Veteran of the Vietnam War attaining the rank of Airman 1st Class.  Upon his honorable discharge from active duty, he was employed as a laborer at Inter Metro until his retirement.  He then worked at the Mohegan Sun Arena as a greeter, unimpressed by all of the famous musicians that crossed his path.

He was a member of St. Elizabeth Ann Seton Parish, Swoyersville, The Knights of Columbus, Luzerne Council 3987, The Plains American Legion, Joseph E. Conlon, Post 558, was an inductee into the Plains Sports Hall of Fame for baseball, and was a member of the Jay-Cee’s.  Maxie also enjoyed taking trips to State College with his late son-in-law John, to attend Penn State Football games at Beaver Stadium.

He and his beloved bride, the former Carmelinda Pardini, would have celebrated 56 years of wedded bliss on August 21, 2021.

He was preceded in death by his brother Anthony Baldrica, and his son-in-law John Lagoski.

Surviving in addition to his bride Linda, are his son Francis Baldrica, Jr., and his wife Joyce, Plains, daughters Gina Masters and her husband Gary, Dallas, and Tina Griffin and James, Kingston, grandchildren Elena Lagoski, Jonathan Lagoski, Cassandra Masters, Logan Masters, Jake Griffin, and Gracie Griffin, great-granddaughter Ilynd Lagoski, many nieces and nephews, and his faithful companion who never left his side, Chloe.

Funeral will be held Thursday, August 12, 2021 at 9:15 am at the Corcoran Funeral Home, Inc., 20 South Main Street, Plains, PA  18705, with a Mass of Christian Burial at 10:00 am at St. Elizabeth Ann Seton Parish, 116 Hughes Street, Swoyersville, PA  18704, with Father Joseph Pisaneschi, Pastor, officiating.  Masks are required for all of those attending the funeral mass at church.

Interment with Military Honors accorded by the United State Air Force and the Plains American Legion Funeral Honors Detail will be held in the Italian Independent Cemetery, West Wyoming.  Family and friends may call Wednesday evening from 5:00 to 7:00 pm at the funeral home.

Memorial donations may be made to Fresenius Kidney Center of Wyoming Valley, 309 Laird Street, Plains, PA  18705 in Maxie’s memory.