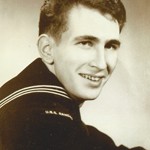 Francis E. Garra, 69, of West Pittston, a humble man with a kind heart, entered into eternal rest at his home on Tuesday, February 11, 2014.

Born in Weatherly Pa., May 23, 1944, he was the son of the late Andrew and Margaret (Bobal) Garra and was a graduate of Weatherly High School, class of 1965.

Francis was a Navy Veteran of the Vietnam War proudly serving on board the USS Ranger, CVA-61, Machinery Division P-1 from 1965 to 1969.  He was employed with Techneglass Inc of Jenkins Township for 37 years until his retirement in 2004. He enjoyed listening to Penn State football and Syracuse basketball on the radio. He loved the polkas, especially Stanky and the Coal Miners and the country music of Hank Williams, Johnny Cash, and various other country and “oldie-but-goodie” artists.  “Frank” always had an entertaining story to tell, and could often be found walking along the river or mediating underneath his favorite pine tree.

Preceding him in death were his brothers Emil Garra (infant), James R. Garra, and Robert D. Garra, and a sister, Dolores (Garra) Seavey.

Surviving are two brothers; Thomas F Garra of Elizabeth N.J. and Andrew J Garra, Jr. of West Pittston.  Also two sisters; Margaret D. (Garra) Bray of Tamaqua and Barbara J. Garra of Harrisburg, and many nephews, nieces, great-nephews and nieces, and even a few great- great nieces and nephews, with most residing in Mississippi, Wilkes Barre, and the Philadelphia area.   Known to all as “Uncle Francie”, he was fondly loved and will be sadly missed, but long remembered.

A military funeral with honors, and interment, will be held at Fort Indiantown Gap National Cemetery, Annville, Pa on March 21, 2014 at 12:30pm.

There will be no calling hours.  Arrangements provided by the Corcoran Funeral Home Inc., 20 South Main Street, Plains, PA  18705.