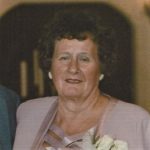 Born in Wilkes-Barre, she was the daughter of the late William and Mary (Doukis) Sikorsky.

Frances was employed at St. Luke’s Villa, Wilkes-Barre, as a Resident Assistant. She was a loving mother, grandmother, and great-grandmother who loved her job of taking care of “old people” and in turn needing the help of others.

She was preceded in death by her husband Stanley Bekish in July of 1987 and her sister Mildred Polinski.

Frances’ family would like to offer a much appreciation to all those who took time and concern with her care, including family members, the staff at North Penn Manor, and the nurses at the Wilkes-Barre General Hospital.

Due to the global state of emergency, graveside services will be held at a later date at St. Mary’s Cemetery, Hanover Township. Arrangements by the Corcoran Funeral Home, Inc., 20 South Main Street, Plains, PA 18705.