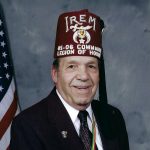 Born in Dallas, he was the son of the late Eugene R. and Helen (Peiper) Lazarus, Sr.

Gene was a graduate of Kingston High School, Class of 1956 and was an Army Veteran serving from 1958 to 1960. Upon his honorable discharge from active service, Gene was employed by D.W. Richards Food Distributors, Moosic, in sales until his retirement. After retirement, he worked for the LCTA as a van driver and the Wilkes-Barre Area School District as a crossing guard.

Gene was known as Pop to most people. If you talked to him one time, you were best friends for life. He was a devoted family man who put everyone’s needs above his own. He was a proud Veteran and he gave much of his time to participating in events with the Legion of Honor unit of the Irem Shrine, especially the annual Irem Circus, which he looked forward to every year. But above everything, he adored his granddaughters, Hannah Gene and Allie. He never missed any event they were participating in; never missed a game from the time they were 5 years old right up until this year. He was their biggest fan and he was immensely proud of all of their accomplishments. The sidelines will not be the same without him.

He was preceded in death by his wife of 48 years, the former Hannah Banks on June 4, 2015, infant son Eugene R. Lazarus, III, and his sisters Elinor Ann Coble and Pamela Thomas.

Funeral Services for Gene will be held Tuesday at 11:00 am at the Church of Christ Uniting, 190 South Sprague Avenue, Kingston, PA 18704. Those attending the funeral services, please go directly to church Tuesday morning. Inurnment will be held at the convenience of the family. Family and friends may call Monday evening from 5:00 to 7:00 pm at the Corcoran Funeral Home, Inc., 20 South Main Street, Plains, PA 18705. Masonic service will be held at 6:45 pm Monday evening.