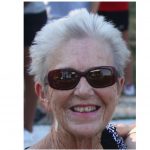 Etta May was born October 24, 1940 in Harrisburg, PA. She was the daughter of the late Jane Elizabeth Olewine of Plains, PA.

Etta May was a graduate of Susquehanna Township High School, Dauphin County, PA, where she was an athletic standout and varsity letter winner in both tennis and basketball.

Etta May’s professional career began at the Pennsylvania State Capital, as an Executive Secretary, assigned to the State Senate. After relocating to Luzerne County, she was hired during the 1972 Agnes Flood disaster as the Executive Secretary to the Director of the Office of Emergency Preparedness in Wilkes-Barre. After her Federal government service, she was hired and appointed by the Luzerne County Commissioners as the Executive Director of the Luzerne County Pension and Retirement System. Etta May completed her professional career assuming the role of President and Chair of the Board of Directors, Portable Space, Exeter, until her retirement.

Etta May loved socializing with friends, traveling, playing gin and most of all being with her family. Etta May was a devoted Nana to her three grandsons Anthony, Benjamin and Nathan. She is loved by her family and friends and happily remembered.

In addition to her mother she is also preceded by her late husbands’, Sonny Achey, Wilkes-Barre, William Perugino, Laflin, Samuel Valenti, Exeter and Raymond McDade, divorced.

Private services will be held at the convenience of the family from the Corcoran Funeral Home, Inc. 20 South Main Street, Plains, PA.

Charitable contributions may be made in memory of Etta May McDade to Heartland Hospice, 613 Baltimore Drive, Unit 3 Wilkes-Barre, PA 18702.