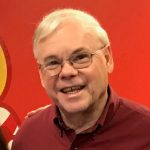 Emerson “Easy” T. Logan, 66, of Mountain Top passed away Sunday January 6th in Geisinger Wyoming Valley, Plains Township, with his wife, sons, and sister at his side.

Emerson graduated from Plains Memorial High School and Wilkes University with a degree in Business. He was employed by the Sunday Independent for 25 years, and subsequently by the Citizens’ Voice, the Hazleton Standard Speaker, and The Scranton Times-Tribune until retirement in 2014. Additionally, he was a Mason and member of Landmark Lodge 442, Wilkes-Barre.

Emerson had an incredible work ethic and love for his family; two qualities that he passed down to his sons. Emerson worked the equivalent of two lifetimes in his short life and, for several years, worked multiple jobs to support his family and put his sons through college. Emerson enjoyed his daily walks visiting with his neighbors and furry friends, working in the yard, and having a great meal. But most of all, Emerson enjoyed being a loving Grandfather to his four Grandchildren, Emerson (his namesake), Annabel, Colin, and Harrison.

He was preceded in death by his sister Shirley Kozerski and brother-in-law William J. Kozerski.

Emerson is survived by his loving wife of 40 years, the former Carol L. Arbogast, his two sons, Robert and his wife Katie and their sons Emerson and Colin, Jonathan and his children Annabel and Harrison, his two sisters, June Fetchen and her husband Edward and Jacqueline Kozerski and her husband John, his Godchild Brenda Battin, and numerous nieces and nephews. Emerson wanted nothing more than to make sure everyone he loved was having fun, and always made sure they did.

Funeral services will be private and held at the convenience of the family at the Corcoran Funeral Home, Inc., Plains, PA.