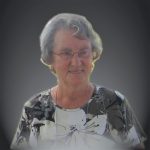 Elinor Alice Kane Perry, 93 of the Parsons section of Wilkes-Barre, passed away, peacefully, Sunday, August 2, 2020 at her home.

Born and raised in Wilkes-Barre, from roots traced back to the late 18th century, County Mayo, Ireland, she was the daughter of the late Alice (Buckley) Kane and William F. Kane.

Elinor was a graduate of Saint Mary’s High School, and College Misericordia, class of 1948. An accomplished and beloved elementary school teacher, she taught decades of students at Holy Savior, Dana and Dodson Elementary Schools.

Devoted to family, a lover and advocate for children, Elinor also loved to travel. With her husband, a member of the 16th Armored Division in World War II which participated in the liberation of Plsen, Czechoslovakia, they travelled throughout the United States participating in that division’s veterans group.

Elinor would be the first to say that she was one lucky lady to have her extensive family and network of love and support. Her children extend special thanks to her brother-in-law, our uncle, Lawrence Perry and his wife Catherine Klingner Perry of New Jersey for their love, dedication and support and also to Tracy Chissler Perry of Tamaqua, PA and James Haberski of West Pittston, PA.

The family would also like to extend sincere gratitude to the nursing staff of Hospice of the Sacred Heart for the care, compassion, and love they provided these past weeks.

No one is actually gone until the ripples they have caused in the world have faded. Please join us, her family, friends and myriad students in applause, farewell, quiet remembrance and, most of all — thank you.

A private Mass of Christian Burial will be held at St. Nicholas Church, 226 South Washington St., Wilkes-Barre, PA, with Father Joseph Verespy, officiating. Family members are asked to go directly to the church that morning. Interment will be held in St. Mary’s Cemetery, Hanover Twp. Friends may call Tuesday, August 4, 2020 from 5 – 7 pm at the Corcoran Funeral Home, Inc., 20 S. Main St., Plains, PA. Due to the ongoing pandemic, restrictions have been put in place by the CDC and the Pennsylvania Department of Health. Those attending the visitation at the funeral home or the Funeral Mass, please follow the practice of social distancing and masks are required at the funeral home and church.

Memorial donations may be made to Hospice of the Sacred Heart, 600 Baltimore Drive #7 Wilkes-Barre, PA 18702.