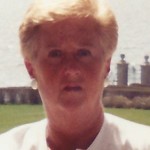 Eileen A. Carmody, 75 of the East End section of Wilkes-Barre, passed away Saturday evening, February 22, 2014, at Riverstreet Manor, Wilkes-Barre, where she had been a resident for the past three years.

Born in Wilkes-Barre, she was the daughter of the late James and Alice (Burns) Marley.

Eileen was a graduate of James M. Coughlin High School, Wilkes-Barre and was employed as a unit secretary at the Wilkes-Barre General Hospital and for The American Red Cross.  She was a member of Holy Saviour Church, East End, and its Altar & Rosary Society.

She was preceded in death by her husband of 46 years Thomas D. Carmody, Sr. on January 28, 2006, brothers James, Michael, Paul, and Joseph Marley.

Eileen’s family would like to thank the nurses and staff at Riverstreet Manor for their wonderful care of Eileen the past three years.

Funeral will be held Wednesday at 9:00 am from the Corcoran Funeral Home, Inc., 20 south Main Street  Plains, PA, with a Mass of Christian Burial at 9:30 am in St. Stanislaus Kostka Church, North End section of Wilkes-Barre, with Father Kenneth M. Seeger, Pastor, officiating. Interment will be held in St. Mary’s Cemetery, Hanover Twp.  Friends may call Tuesday evening from 5 to 8 pm at the funeral home.