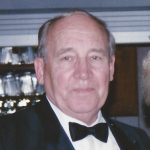 Born in Plains, he was the son of the late Anthony and Frances (Popko) Slabacheski.

Ed attended Plains Memorial High School, and was a Navy Veteran of World War II, attaining the rank of Seaman First Class. Upon his honorable discharge from active duty, he was employed as a milkman for Dallas Dairy until his retirement. He was then employed in the patient transportation department at the Wilkes-Barre General Hospital.

Ed was a devout Catholic and was a member of St. Andre Bessette Parish, North Wilkes-Barre, where he served as a senior altar server, choir member, and Eucharistic minister. He was also a member of the Plains American Legion, Joseph E. Conlon, Post 558, where he was a member of the Funeral Honor Guard, The Polish American Veterans, Hudson, and was a 4th Degree Knight, The Knights of Columbus, Council 372, Pittston. Ed was also an avid bowler.

Funeral will be held Friday, February 28, 2020 at 9:30 am at the Corcoran Funeral Home, Inc., 20 South Main Street, Plains, PA 18705, with a Mass of Christian Burial at 10:00 am at St. Andre Bessette Parish, 668 North Main Street, Wilkes-Barre, PA 18705. Interment with Military Honors accorded by the United States Navy and the Plains American Legion Funeral Honor Guard will be held in Mount Olivet Cemetery, Carverton section of Wyoming. Family and friends may call Thursday evening from 5:00 to 7:00 pm at the funeral home.