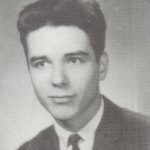 Born in Wilkes-Barre, he was the son of the late Edward J. and Isabelle A. (Howlan) Jones.

Ed was a graduate of St. Mary’s High School, Wilkes-Barre, Class of 1962, and Wilkes-Barre Business College.  He was an Army Veteran, and upon his honorable discharge he attended Kings College, Wilkes-Barre, earning his Bachelor’s Degree in Social Work.

Eddie was a devout catholic and was a very active member of St. Nicholas Church, Wilkes-Barre, where he served as a Eucharistic Minister.  He was a member of the church choir, the parish liturgical committee, was the director of the Funeral Mass acolytes, and would distribute Holy Communion to the homebound on Saturday and Sunday.

He was employed at Sunshine Markets for many years as Deli Manager and Front End Manager until the store’s closing.

In addition to his parents, he was preceded in death by his Brothers Robert and Donald Jones, Sister Gloria (Mooney) Ward, and niece Renee Carr.

Memorial donations may be made to St. Nicholas Church in Edward’s memory.