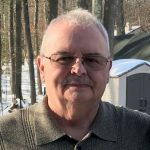 Born in Wilkes-Barre, he was the son of the late Charles F. and Bessie (Steidinger) Goodrich.

Eddie attended Wilkes-Barre City Schools and was employed as a Layout Specialist at Offset Paperback, Dallas, retiring after 48 years. He was a member of Outlet Community Church, Tunkhannock, and was an avid fisherman.

He was preceded in death by his son Michael Yanchulis, and his brothers George and Charles Goodrich.