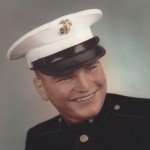 Born in Forest City, PA, he was the son of the late John and Helen (Blisko) Reposh. Donald attended James M. Coughlin High School, Wilkes-Barre, and at the age of 17 enlisted in the United States Marine Corp serving during the Korean Conflict.

Donald was employed by the Time Leader, Wilkes-Barre as an engraver for 38 years until his retirement. He was a Master Wood Carver of fish and certified by Bass Pro Shop. He was an avid hunter and fisherman.

Donald was preceded in death by his son Daniel J. Reposh on October 21, 2015, brother Allen Reposh and his sister Norma Bechetti.