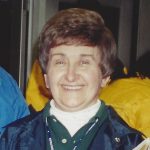 Born in Wilkes-Barre, Dolores was the daughter of the late Bruno and Sophia (Paszkiewicz) Zdanowicz.

Dolores was a graduate of Sacred Heart High School, Plains, Class of 1959 and Empire Beauty School and Cosmetology, Wilkes-Barre, Class of 1960. She was employed as a beautician at Barbara’s Hair Fashions, Wilkes-Barre, at Sugarman’s Appliance Center for 24 years, until its closing, The Comfort Inn Suites, Wilkes-Barre, for 3 years, and last at The Mohegan Sun Arena from its opening until her retirement in 2014.

She was a member of Saints Peter & Paul Church, Plains.

A Mass of Christian Burial will be held Tuesday, July 2, 2019 at 10:00 am at Saints Peter & Paul Church, 13 Hudson Road, Plains, PA 18705, with Father John C. Lambert, Pastor, officiating. Interment will be held in the parish cemetery, Plains. Family and friends may call Tuesday morning from 9:00am to 10:00am at church. Arrangements by the Corcoran Funeral Home Inc., 20 South Main Street, Plains, PA 18705.

Memorial donations may be made to The SPCA of Luzerne County, 524 E. Main Street, Wilkes-Barre, PA 18702, in Dolores’ memory.