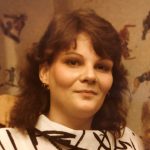 Debra “Debbie” West, 60, of Wilkes-Barre passed away Wednesday morning, March 28, 2018 at Geisinger Wyoming Valley Medical Center, Plains, Twp. She left this world remembering everyone’s birthdays, which she faithfully used each and every time she played the lottery. Though she never won the jackpot, she never stressed over picking numbers.

Born in New Jersey and raised in Miners Mills, Debbie made quite the everlasting impression on anyone lucky enough to meet her. That includes a chance encounter with her future sister-in-law in a second grade restroom, where Debbie introduced herself by boldly asking, “Did you know Abraham Lincoln was a ham?” No, she did not, but she’d never forget.

After a brief but memorable stint at Bishop Hoban High School, she graduated from James M. Coughlin High School in 1976. After receiving her cosmetology license from Empire Beauty School, Debbie made a career for herself styling hair.

Through the years, Debbie truly lived her life out loud, and had a penchant for tapping into your inner child. But behind that big personality was a softhearted and loyal defender of those she loved. Her generosity knew no bounds—that includes the kid to whom she gave her brother’s baseball card collection.

Debbie is preceded in death by her parents, Neil and Joan West, and infant sisters, Joan and Amy.

In lieu of flowers, buy yourselves a scratch off and dedicate your winnings (if applicable) to Debbie’s honor.

Rest in peace, Debbie. Now hop in your red truck and cruise among the stars.