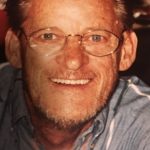 Born in the Heights section of Wilkes-Barre, he was the son of the late David & Harriet (Allen) Gwynn.

Dave attended G.A.R. High School and was employed by the City of Wilkes-Barre in the Sanitation Dept. for 25 years, until his retirement.  He and his wife the former Donna Marie Chernowsky celebrated their 39th wedding anniversary on February 14, 2018, Valentine’s Day.

Memorial donations may be made to the Alzheimer´s Association of Northeastern PA, 57 North Franklin Street, Wilkes-Barre, PA 18702.