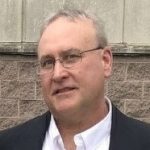 David Dragon, 56, of Forty Fort and formerly of Plains Township, passed away Wednesday evening, December 11, 2019, surrounded by his loved ones.

Born in Plains, he was the son of Barbara (Ziemba) Dragon and the late John Dragon.

He was self-employed as a landscaper and mason and was a member of Grace Episcopal Church, Kingston. He was an active member of the church and enjoyed donating his time landscaping and working in their beautiful gardens.

Dave was a true lover of his children, sports and nature. As his children were growing up, he enjoyed coaching his daughters’ Jenkins Township softball teams and his son’s football team, the Plains Yankees. Dave could be found on Friday nights on the side lines of the Pittston Area football games as a part of the chain gang looking on as his son played. He would cheer on his daughters as they played softball and tennis in high school. Each summer the family would spend time camping at Keen Lake or hiking the falls trail at Rickets Glen. He also enjoyed cooking. He was known for making “Dave’s Killer Ribs”, slab bacon and eggs over an open campfire, sausage and peppers among many other things. He always had a history story to tell, a corny joke or an explanation of anything science related, even if his kids and their friends would roll their eyes. He was a good-hearted, caring man and he will be missed by his family and friends.