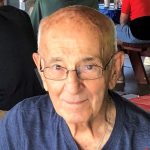 Daniel “Blackie” Rohovie, 93 of Wilkes-Barre, passed away unexpectedly but peacefully on November 21, 2021 at the Wilkes-Barre General Hospital.

Born in Wilkes-Barre, he was the son of the late John and Mary (Hanku) Rohovie.

Danny was employed by Cornell Iron Works as well as other machine shops in the area.

He was an avid walker, walking 10 miles a day, every day in the city. He enjoyed watching sports, Abe’s Hot Dogs, and looked forward to treating his “grandchildren” to Denny’s weekly. Danny was known for his kindness and sense of humor as well as taking championships in shuffleboard and darts locally.

He was preceded in death by his sister Irene Harenza and his brother Nick Rohovie.

A Celebration of Life will be held at a later date. Arrangements entrusted to the Corcoran Funeral Home, Inc., 20 South Main Street, Plains, PA 18705.