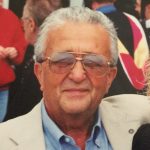 Born in Plains, he was the son of the late Andrea and Francesca (Filippini) Cinti.

Cheto was a graduate of Plains Memorial High School, Class of 1954 and was a proud Marine Corps Veteran of the Korean Conflict, attaining the rank of Corporal. After his honorable discharge from active service, he attended King’s College, Wilkes-Barre.

He was employed as an insurance adjuster at Nationwide Insurance, for more than thirty-five years. He was a member of Saints Peter & Paul Church, Plains, where he proudly served as an usher and a member of the Plains Rotary Club where he served as Past President. Cheto was an avid New York Giants football fan, a jazz aficionado, a super-fan of harness racing and the Pocono Downs Racetrack and above all else, he was endlessly proud of his children, Ciro and Nino, who coached for the Wilkes-Barre Area Wolfpack, Michelle for her decades long work with Wilkes-Barre Area School District and Nina for being a best-selling author. His children and grandchildren were his pride and joy and sports made him happy. His family and friends were everything.

He and his wife the former Gloria Fanti would have celebrated their 46th wedding anniversary on December 26, 2020.

He was preceded in death by his brothers Angelio and Giovanni Cinti and his sister Thomassina Mascelli.

The Cinti family would like to give a heartfelt thank you to the Corcoran Family for their care and compassion in planning the service and to Saints Peter & Paul and Father Lambert for providing comfort and peace. The staff at Geisinger, you’re in our thoughts and prayers for being so kind, and above and beyond in your care of our beloved father.

A Drive-by visitation will be held Monday, November 9, 2020 at 11:30 am at the Italian Independent Cemetery, Stites Street, West Wyoming, PA. Please use Shoemaker Avenue to Stites Street to pay your respects. Please stay in your car, continue at a slow pace, and exit via Evergreen Street, West Wyoming. Arrangements entrusted to the Corcoran Funeral Home, Inc., 20 South Main Street, Plains, PA 18705.