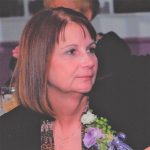 Cheryl A. McDermott, 66 of West Pittston and formerly of Dupont, passed away suddenly on Thursday morning, February 8, 2018 at her home.

Born in New Brunswick, New Jersey, she was the daughter of Angeline (Brostoski) Plis of Suscon and the late Frank Plis.

Cheryl was a graduate of North East High School, Hughestown, and was employed in human resources at the Veterans Administration Medical Center, Plains, Township, until her retirement.  She was a member of St. Barbara’s Parish, Exeter, The Regina’s of Kings College, The Polish Club, Dupont, The Elks Club, Lodge #109, Kingston, and The Polish American Veterans, Hudson.

Cheryl’s favorite place to be was at the beach, especially the Irish Weekend at North Wildwood, New Jersey and the Outer Banks in North Carolina. Her greatest joy in life was being involved in the lives of her grandchildren.  She enjoyed watching them all grow and prosper in their lives and activities.  Everyone who knew Cheryl, remember her as “Hockey Gram”, ready to cheer on her grandchildren.

She was preceded in death by her husband William P. McDermott on April 22, 2016.

A Mass of Christian Burial will be held Tuesday, February 13, 2018 at 9:30 am in St. Barbara’s Parish, St. Anthony of Padua Church, 224 Memorial Street  Exeter, PA  18643, with Father Michael E. Finn, Pastor, and Monsignor Thomas M. Muldowney,  Vicar General of the Diocese of Scranton, officiating.  Those attending the funeral mass are asked to go directly to church Tuesday morning.  Private interment will be held at the convenience of the family.  Family and friends may call Monday evening from 5:00 to 8:00 pm at the Corcoran Funeral Home, Inc., 20 South Main Street, Plains, PA  18705.

The family request that in lieu of flowers, Memorial Donations may be made to Little Eric’s Foundation, P.O. Box 1004, Pittston, PA 18640 or to Janet Weis Children´s Hospital, 100 North Academy Avenue  Danville, PA  17822.