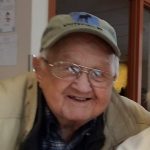 Born in Plains, he was the son of the late Stanley and Josephine (Sheebee) Walkowiak.

Charles was a graduate of Plains Memorial High School, Class of 1945. Upon his graduation, he enlisted in the United States Army and was a veteran of World War II. He was employed as a presser at Lonnie Frocks, West Pittston, until his retirement.

He was a member of Saints Peter & Paul Church, Plains, the Plains American Legion, Joseph E. Conlon, Post 558, and the Friendship Club of Plains.

Charles was preceded in death by his wife of 68 years, the former Rose Zastulka on January 22, 2019, brothers Frank, Joseph, and Henry Walkowiak, sisters Mildred Forlenza and Claire Blandina.

A Mass of Christian Burial will be held Friday, October 25, 2019 at 10:00 am at Saints Peter & Paul Church, 13 Hudson Road, Plains, PA 18705, with Father John C. Lambert, Pastor, officiating. Interment with Military Honors accorded by the United States Army and the Plains American Legion Funeral Honors Detail will be held in the parish cemetery, Plains. Family and friends may call Friday morning from 9:00 am until the time of mass at church.