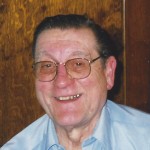 Bernard E. Ferdo, 87, of Dallas and formerly of the East End section of Wilkes-Bare, fell asleep in the Lord Tuesday evening, December 23, 2014, at the Wilkes-Barre General Hospital, with his family by his side.

Born in the Miners Mills section of Wilkes-Barre, he was the son of the late John (Firda) and Anna (Micikas) Ferdo.

Bernard was known for his Great Sense of Humor, love of the outdoors and had coached Little League and Teener Baseball.

Bernard was preceded in death by his Wife the former Dolores Lukach who he said “a chance meeting at Scouton Lee Ice Skating Pond resulted in 63 years of happy marriage to his best friend”.