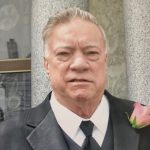 Armand “Ducho” Lepore, Sr., 90 of Plains Township, passed away Saturday morning, June 11, 2022 at his home with his family by his side.

Born in the Hudson section of Plains Township, he was the son of the late John and Adeline (Semenza) Lepore.

Armand was a graduate of Plains Memorial High School, Class of 1949. He enlisted in the U.S. Navy during the Korean Conflict and after discharge he worked processing chickens at City Poultry, where later purchased the business. The name of the family business, City Mager, is part Armand’s old business and that of another, Mager Provisions, he acquired along the way.

For over 50 years, Armand’s business has been located at various locations in the city – Lee Park, South Street, Wood Street and the former Murray Complex. Currently his business is located at the corner of North Pennsylvania Avenue and Butler Street in Wilkes-Barre.

Armand was an avid Dallas Cowboys and New York Yankees fan. He enjoyed going to dinners with family and friends, going to Polka Weekend, and taking bus trips to Atlantic City. He loved spending time with his grandchildren and great grandchildren and will always be their “Poppop”.

A Mass of Christian Burial will be held Saturday, June 18, 2022 at 10:00 am at Saints Peter & Paul Church, 13 Hudson Road, Plains, PA 18705. Those attending the funeral mass, please go directly to church Saturday morning. Private family interment will be held at the convenience of the family. There will be no calling hours. Arrangements entrusted to the Corcoran Funeral Home, Inc., 20 South Main Street, Plains, PA 18705.

In lieu of flowers, memorial donations may be made to Hospice of the Sacred Heart, 600 Baltimore Drive #7, Wilkes-Barre, PA 18702, or to Saints Peter & Paul Church Food Pantry, 13 Hudson Road, Plains, PA 18705 in Armand’s name.